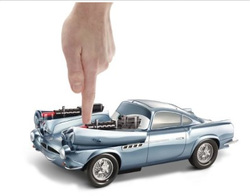 Finn McMissile is on a mission to save the world from an evil mastermind intent on cornering the world's oil market.

Will British spy car McMissile save the day with the help of Lightening McQueen and tow truck Mater? It's up to you!

Zoom McMissile to the rescue, then activate his secret weapons to defeat the bad guys. Hear real phrases as voiced in the Disney Pixar animated film by Michael Caine (quite a lot of people know that, actually).

Activate Finn's real missiles and fire them with this all-action fun Cars 2 toy that'll be a firm favourite for months to come.

Amazon Customer Review
"After watching the movie, Cars 2, my son was desperate for this 'spy car'. He loves playing with it. The sounds are very good and accurate and the functions are easy to activate."

Like this top Christmas toy, but want something for an older lad? Seek out the Nerf Night Finder instead!