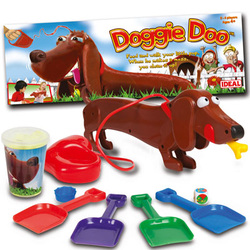 We love the Doggie Doo game - dogs, poo and responsible pet ownership in one game! And the fact that the pooping canine is a dachshund is just so appropriate!

Players feed the dog plasticine treats, then roll the dice to see how often they squeeze the dog's lead. Every squeeze brings the plasticine closer to the outside world again, and when it appears, you scoop the poop with your little spade. First player to 3 perfect piles wins!

Unlike so many Christmas toys this year, there's no batteries to buy, and users report that your plastic pooch might make a 'trump' sound too - an added bonus for most kids!

Why Doggie Doo's Dachshund is Inspired
Presumably the designers of Doggie Doo chose a dachshund for its long body and therefore longer poop channel, but we reckon it's because these determined hounds are natural born scroungers! As a child, Chief XmasGiftGuru KJ had a dachshund who would eat anything, and we mean, anything...

Max the garbage hound, digesting!
"Max, a fiesty black and tan Standard Dachshund, ruled our family with a tail of iron. Nothing was safe from his attention, or more accurately, his appetite. Never has a small dog with such short legs eaten, chewed, demolished or destroyed so much.

He had the appetite of an elephant; no food was safe. Defrosting chops, cardboard boxes, shoes, socks, washing up cloths, you name it, all disappeared down his greedy gullet only to reappear as a shadow of its former self two days or so later.

His pet hate in the whole world were the garbage men, who risked life and ankles to collect our dustbins (in the days when they would walk through a gate and lift a heavy bin). Max would rush out the minute they had gone, eager to reclaim any tasty morsels left on the lawn; eggshells, foil milk bottle tops, or bits of glass left from an old fluorescent tube that had been broken into the bin. Three glass crunches (from the dog) and a scream (from mother) later, we rang the vet, who prescribed Max instant hot oat cereal every hour on the hour for ten hours. (The idea being that the glass gets coated in gloop and passes through the gut harmlessly.)

After three hours worth of the grey concoction, the dog was looking delighted. After five, he was looking full. After six he refused to touch the stuff unless it was laced with meat juices and after eight he gave up entirely and staggered to his bed, belching gently.  Next morning he was alive and kicking, if a little constipated… and he never learnt his lesson."

So, we'll be buying the Doggie Doo game for any kids we can find who want a dog - or already has one!

Like this  Christmas toy for a girl but want something less, er, messy? How about a cuddly Fur Real Cookie Puppy dog instead?