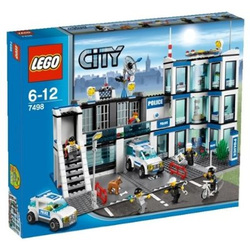 Lego City Police Station is right at the forefront of fighting crime in Lego City!

The prisoners might be trying to escape via the drain, but you'll soon round them up using the police car.

Then, lock the evidence in the evidence room, take their mug shots, and lock your criminals securely in the cells before you can say say "You're nicked, mate"!

A superb play set for all Lego fans with plenty of figures included for hours of law-abiding fun.


Lego City Police Station Play Set Reviews (from Amazon):
"The police station is great.It is my best lego city model ever! I play with it all the time.It is also very fun making it! I would definitely give this a 5 star!"  [Oliver, age 8]

"We bought this for my daughter's 6th birthday as she loves Lego. Thinking I would get to help proved to be wrong. The clear instructions and well laid out diagrams, as usual from Lego, meant that my daughter has been occupied for hours and still isn't finished. She is addicted to this latest addition to her Lego City collection. Another great piece and well worth the asking price, although we did find the discounted price on Amazon more attractive."


A Lifetime of Lego
Lego was invented by a Danish carpenter, Ole Kirk Christiansen, and the first bricks were actually made of wood. The familiar plastic bricks first appeared in 1947, with the current design patented in 1958, and any Lego bricks made from 1958 onwards will fit with any modern Lego brick.


Like this  Christmas toy for a boy but want something more outdoors-y? How about a Nerf Nite Finder?