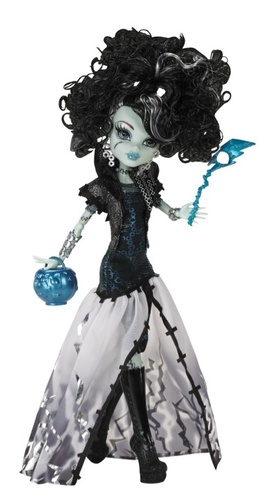 The coolest ghouls in school are in fang-tastic costumes for Christmas 2012. Killer hairstyles, sparkles and accessories pay homage to their famous monster heritages.

It's not any wonder that kids love these characters. In a world of werewolves and vampires, these characters fit right in and take their rightful place in ruling a very different kind of high school.

Meet the girls who put the ghoul in rule!

Frankie Stein is the daughter of Frankenstein's monster and his bride, and the new ghoul at school, having only been alive for 15 days. She is very friendly and athletic, never wasting time being negative, but has a clumsy streak, as her body parts tend to fly off!

Draculaura - and in case you're a parent not in the know - she's the daughter of that famous vampire Dracula. She's avidly waiting for her sweet birthday - not sweet sixteen, try the sweet 1600th birthday! She likes to head to high school dressed in black, but since black is so dull, she likes to top it with eye-catching pink. She enjoys bringing along an umbrella for protection against the sun's deadly (for her) rays. But on game days, she loves her pom-poms and sporty fearleading outfit.

Then there's Cleo de Nile. Her famous dad is The Mummy and Cleo is just shy of 6,000 years looking young. This princess likes to rock jewelry and wants to be in charge. That's why she's captain of the fearleading squad. She doesn't like the dark and the subject that she can't stand in school is history - kind of redundant when she's been there, done that! Her pet Hissette is a cobra that's best left alone.

Clawdeen Wolf is the 15-year-old daughter of the Werewolf. She is a fierce fashionista, and stands out in any crowd. She has many siblings, including her older brother Clawd, and her younger sister Howleen. Coming from a big family, she's mostly had to fend for herself, which has created a streak of resourcefulness in her.