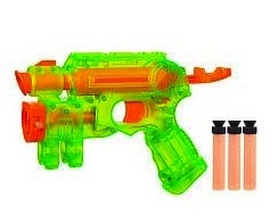 Kids, are you ready to get your game on?

You don't want to head into the thick of the battle without having the best of the weapons for your trusty sidekick. With the NERF Vortex Vigilon from Hasbro, you're going to rule the territory!

If you're fighting an inside battle, it doesn't matter if you're hunkering down away from the enemy behind an overturned card table or if you have the sofa as a shield, your gun needs to show that the victory belongs to you.

Outside, it doesn't matter where the opposition runs - they can't escape the momentum behind the weapon that gives you a fighting edge.

Everyone knows that all blasters aren't made the same and you want the top gun - the one that's not going to let you down when the going gets tough. You need the blaster that shows everyone who's in charge and who they'll answer to. Ammunition is the key to keeping up a steady barrage that overpowers your opponents and lets you slap a capital V for Victory on the battlefield.

Nerf Vortex Vigilon Features
The Nerf Vortex Vigilon has got your back with the five long-range discs that show you're taking care of business. The weapon has a magazine built with a warrior in mind, because it pops down for you to load it up even in the thick of the action. When the fighting gets hot and heavy, this weapon won't fail to keep you covered and gaining ground. The opposition won't have time to even know what hit them before they're out for the count!

Because it has long range firing capability, the opponent can run, but they can never hide. Even targets running for cover won't be able to outdistance the power behind this weapon.

Get loaded, locked and keep firing in seconds which gives you the time edge against those who would dare think they could fight against you. You don't have to stand still to fire and hit your target. Thanks to the steady firing action of this ultimate toy weapon, you can hit them as you go deeper into enemy territory without taking on hits yourself.

The NERF Vortex Vigilon from Hasbro is a shooting machine for the person who can understand and take command of the power it offers. Get your inner sniper ready to make notches on the barrel as the enemy attempts to outwit you in game play.

The competition will be in full surrender mode before the battle is half over and victory never smelled so sweet. This 5-disc blaster can shoot farther than any toy like it and is the weapon to have with you to answer any challenge.

Like this Nerf blaster Christmas toy for a boy but want that works in the dark? Look at the new Nerf N Strike Night Finder!