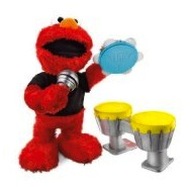 Do you remember last year's mad rush to get the top Christmas toy only to find they were all sold out by December? Every year, there's a pre-school Christmas toy that's so in demand, retailers and online stores can't keep up with the demand.

Looks like the same demand is building for the latest hot Elmo toy. That's why you don't want to wait to get your hands on the Sesame Street Let's Rock! Elmo from Hasbro.

What is it about Elmo that delights kids so much?

Maybe it's the bright red colour or the softness of his fur. Maybe it's the round, big eyes or maybe it's the way he inspires giggles and hugs from all those kids who want one. Now Elmo is back on the scene and he's hotter than ever, as he's rocking his way into your child's heart.

Get Ready To Rock with Elmo
It's time to make some serious music and Elmo comes dressed ready to take centre stage'. In his black t-shirt with Elmo lightning flash design, he's definitely the leader of this one man band. When he starts doing his thing and the music pours out, your child will be happy to sing right along with him!

The Sesame Street Let's Rock! Elmo from Hasbro comes with just the right tools for his rock band. He has a microphone for singing those nice soft ballads or belting out those rock and roll lyrics, and the microphone is the perfect size for a preschooler, too. He also has a tambourine for those impromptu jam out sessions as well as a yellow-topped bongo drum set.

Since the additional musical instruments are just the right size for little ones, your child will enjoy making music with the tambourine and they'll love getting to beat the drums in time to the music.

The really cool thing about this toy is how interactive and smart the Elmo doll is. Whatever instrument your child is playing, Elmo knows and he'll jam along to what your little one is playing! It's like being a revered member of the band for your preschooler and they'll love being a rock star alongside their favorite furry pal.

The Sesame Street Let's Rock! Elmo from Hasbro has the ability to play songs that come built in or your child can make his own songs for the two of them to turn into chart toppers.

What's an extra bonus with this toy is that it works with the other Let's Rock Instruments inclsuing a and no matter which one you hand to Elmo, he knows what it is and he'll do what he was born to do - rock on!
Love this Elmo top Xmas toy? Why not look at the other pre-school hot Xmas toy, the Elefun Poppin' Park!