It's time to release your child's inner Jedi (or Sith) this Christmas with the Star Wars Ultimate FX Lightsaber, the most realistic and robust Star Wars lightsaber to date.

The Star Wars The Clone Wars Ultimate FX lightsaber provides one of the most authentic experiences ever for kids, as they battle as either Darth Vader or Anakin Skywalker.

Kids can put themselves in the middle of the Star Wars saga action with this amazingly realistic version of the iconic lightsaber. Power up the galactic weapon to see the first of the brightly glowing blade’s light effects and hear the power-activation humming sound.

Swing and slice the lightsaber through the air and you’ll hear more motion sensor-controlled sound effects like clashing, battle impact and crackling sounds.

When the battle is over, be sure to keep that trusty lightsaber by your side — you never know when you’ll need it again, especially if someone else tries to eat the last portion of Christmas pud… 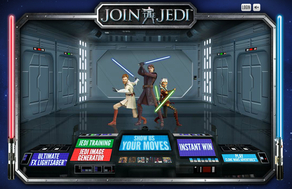 The Hasbro Star Wars website is a delight for kids, and it's totally free.

They can join in various online games including Jedi training, and vote for their favourite lightsaber moves in an international competition that sees the winner having their move animated and included in the animated Clone Wars tv series. Wow!

Go on - Re-live Your Star Wars Youth!
At XmasGiftGuru, we're old enough to remember the excitement of that first Star Wars film, with its ground-breaking CGI and cinema-shaking sound.

Who didn't go home wanting to battle evil with a cool, humming, glowing lightsaber, and instead battling the armies of the Dark Side with a broom handle and a "szwoosh!" and a "fzzumph"? (Just us, then).

Then we'd dream of teaming up with the crew of the Millenium Falcon, sitting alongside Chewy and the gorgeous Hans Solo of Harrison Ford, and leaving Luke Skywalker behind somewhere oh so accidentally..

OK, most of you lads would probably have preferred to get close to Princess Leia, even if Carrie Fisher's hairstyle did look like a nasty accident with two Danish pastries…

So, go on, get a couple of these cool lightsabers, gather a few mates and the Star Wars DVD complete boxed set, and save the galaxy one more time!

Like this Christmas toy for a boy but want something potentally less lethal to your ornaments? How about a Lego Millenium Falcon kit instead?