Take on the Teksta T-Rex Robotic Dino This Christmas 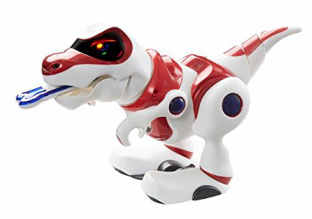 Take a walk on the wild-side with the Teksta T-Rex, your interactive prehistoric pal!  Teksta T-Rex is your new robot buddy several million years in the making. The perfect gift for dinosaur fans aged five years and up.

Thanks to his artificial intelligence program, T-Rex will roar, cry, whine and change his eye patterns in ways to show how he's feeling. T-Rex has state-of-the-art sensors to know if he's being petted, fed, talked to, and played with.

T-Rex is amazingly smart and he is easy to program. Use the two Mode buttons on T-Rex’s head to interact with him.

In Conversation mode, you can have a conversation with T-Rex. T-Rex will listen to what you say and reply as best he can with roars and dino sounds. T-Rex will not walk in this mode, so it’s a good way to play and talk with him on a table.

Switch him into Singing and Dancing Mode and you can select a song and dance routine.

Get appy with your T-Rex 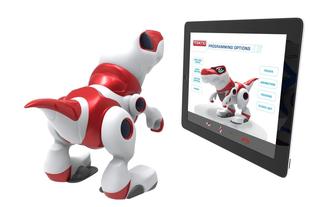 Download the free app for access to over 100 extra play features, including games and new tricks. Get your T-Rex app from the Apple App Store or via Google Play. He'll work with iPads running iOS 5.0 or above, and on tablets running Android 3.0 or above.

Simply download the T-Rex app to program T-Rex from your tablet, and to issue commands to your dinky dino! For best performance, keep your iPad or tablet within 18 inches (46cm) of your T-Rex's head. A noisy background will affect the link between T-Rex and the tablet so he works best in a quiet environment when in tablet mode. To exit tablet mode, just press his nose.